Our beautifully furnished and fully equipped apartments offer a hotel-style service including a 24-hour reception and concierge, on-site breakfast options and weekly cleaning service if you plan to stay with us for a while.

Perfectly placed to explore the city, we’ve got Queen Street Station on our doorstep and the all-important Style Mile. Before you leave for the day make sure to stop for some breakfast on the ground and basement floors at the infamous and much loved Anchor Line restaurant.

We hope to see you soon at our stunning boutique hotel in Glasgow.

Bobby’s accustomed to attracting a crowd of awe-inspired fans as he works, so he was happy to talk to Native Glasgow guests while he created Look Up, answering questions about where he finds his inspiration.

“All sorts of things inspire me,” he said. “Music, culture, fashion and life. I love the culture that’s in the city between the music and clubbing. The architecture. Quirky wee things that makes you fall in love with it and enjoy it.”

We told Bobby that we wanted to inspire all our guests to wander the city and take in all its amazing street art. So, once he’d finished working on this fantastic new mural, he kindly agreed to give some Native Glasgow guests a local’s tour of the city.

Join us on our wander with Rogue Oner.

Native Glasgow – Art Wander with Rogueoner from Native on Vimeo.

Follow Rogue Oner’s mural trail and keep an eye out for some of our favourite spots to Look Up:

The World’s Most Economical Taxi 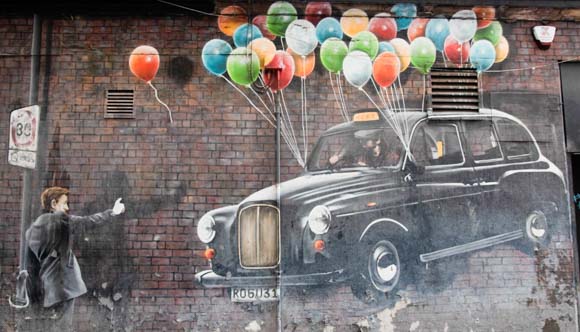 Start your tour Mitchell Street adjacent to Buchanan Street, where you’ll find this fantastic floating taxi. Fun fact – Rogue Oner actually painted on the brick wall effect behind the taxi. While you’re there, be sure to look out for Smug’s mural on the same street called Honey, I shrunk the kids.

Rogue Oner created the mural of much-loved Glaswegian comedian Billy Connolly to celebrate Billy’s 75th birthday back in 2017. You can find another of Rogue Oner’s Billy Connolly murals in Old Wynd Car park. 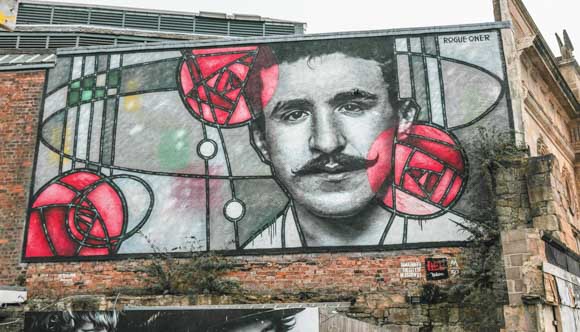 Rogue Oner, along with Art Pistol, created the mural of Charles Rennie Mackintosh for the 150th anniversary of the artist’s birthday. It looms over the Clutha & Victoria Bar at the end of Stockwell Street.

The mural of 3 cats playing beneath the feet of ‘the Crazy Cat Lady’ can be found on Sauchiehall Street in Glasgow city centre. It’s on the site for the former Victoria’s nightclub which burned down in 2018.

If street art is your thing, then why not check out People Make Glasgow’s city centre mural trail.

If you’d like to see ‘Look Up’ for yourself, you’ll find it in its current home at Platform at Argyle Street Arches.

Book a stay in the city of street art in our aparthotel on St Vincent Place.

What do you love most about the city and it’s history?

Glasgow is filled with history, culture and the latest music and pop up events that draws the crowd all year round. That’s why I was intrigued when Native invited me to stay at their new aparthotel in Glasgow city centre in the Anchor Line building, once the headquarters of the Anchor Line Shipping Company. This was a company that played a huge part in putting Glasgow on the map in the early 1900s, thanks to its booming shipping trade and cruise liners. 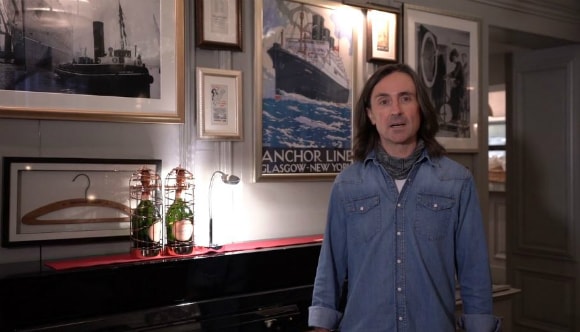 We’re thrilled that you enjoyed your stay with us at Native Glasgow. What was the highlight?

What I especially like is that they kept a lot of the heritage, proudly showcasing nautical emblems as you enter the hotel, the original fireplaces, and one apartment even has the two original safes that stored gold and other valuables! The apartments are fantastically located for a short stay in the city or for exploring the surrounding countryside, which I couldn’t recommend enough. I’d say that Native Glasgow is the place to stay for a truly authentic Glaswegian experience. 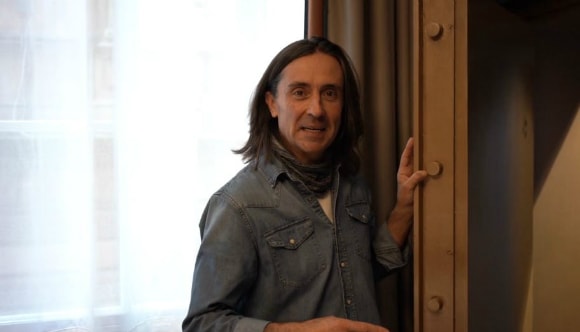 Thanks, Neil – we couldn’t agree more.

If you’d like to hear more from Neil about the history of our new aparthotel in Glasgow city centre, watch him here in all his glory…

Book your stay and see Native Glasgow for yourself.